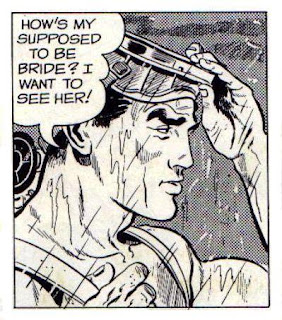 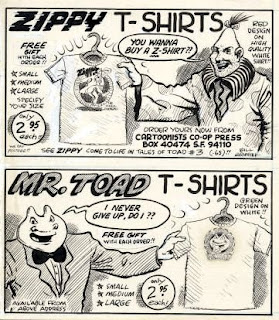 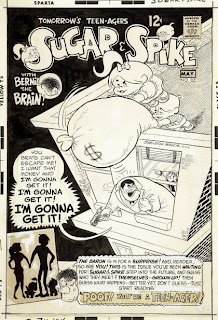 Posted by Dave Karlen at 7:35 PM No comments: A good friend and comic artist recently said he loved my regular feature on those crazy 1970s prices "fascinating - but horrifying!" was the words he used. Well, here we go again, so everyone get ready to be scared by these prices once more. In my endless search for information about comic artwork from the past I ran across another great ad from the Comic Buyer's Guide that focused on only complete stories for sale. It's always good to know what's out there in circulation, waiting to be bought up (hopefully at these prices), but I imagine these gems of comic art are probably just locked up in a few lucky fans collections. If you like those wonderful tales of horror from Jim Warren's trend setting spook magazines from the mid sixties, your in for a real treat, since many of these stories listed are from his publications. Lets start off with a beautiful Dan Adkins tale called The Wanderer! from Warren's Eerie #9, that was an eight page story in striking wash tones for just $150. Sounds good to me. What about a moody Gene (The Dean) Colan story, For The Birds, from Eerie #10 of eight slick pages for only $150. If you wanted a Golden Age master like Johnny Graig drawing in the Silver Age, try Blood Fruit from Eerie #11, eight terror driven pages could be yours for the grand sum of one hundred thirty bucks.

Lets jump over to DC for a minute and see what was out there floating around at the time. You could tell Dick Giordano was a fabulous inker as well as a first rate artist as shown in his work on the Batman #247 story called, And A Deadly New Year, eighteen powerful pages with an exceptional splash would cost you $450. What is that $25 a page? Unbelievable. Or how about, The World of the Perilous Traps, a spectacular thirteen page Gil Kane tale staring Green Lantern fighting none other than Sinestro from issue #13 for only $350. But unfortunately it did have some slight stains on the title page, maybe that's why it was so cheep? I always loved DC's anthology books, including My Greatest Adventure #58, which this dealer had an entire eight page story, Trapped in the Land of L'oz, for $225 by comic master Alex Toth! Is a complete story not enough for you? How about the whole book, you ask? OK, I have just one by fan favorite Dick Dillin from his run on Blackhawk, issue #192 with two terrific stories. First a nine page backup yarn, The Mirage Blackhawks, where our hero obtains super powers in a mysterious floating Metropolis. Or take the title feature, King Condor's Fabulous Birds, sixteen pages of high-flying action and adventure, and both could be your for $600. These two wonders had everything this period at DC was known for, truly some wild and wonky stories at their best.

Continuing with more Warren artwork, there was a Roger Brand six page story entitled, The Haunted Sky, from Creepy #17 for a mere $90. One of my favorite artists, no matter who he was working for at the time, was the uncanny Jerry Grandenetti. His seven page story named, Rub The Lamp, from Eerie #9 was as bizarre and surreal as any of his best work, and it's twice-up too for just $12.14 a page! Now that really is a scary story in more ways than one. Another solid draftsman was featured in Eerie #4, Gray Morrow's ten page Island at the World's End cost $225. Eerie #5 from 1966 had a chilling seven page story by Rocco Mastroserio called Dr. Griswold's File for $85 that sold last year at auction for $1840.30. Would you like another titan of comic art, try a six page masterpiece called, Foragers, from the innovative Blazing Combat #3 by Reed Crandall for one hundred fifty dollars. Angelo Torres also did some marvelous war art in Blazing Combat #4, especially the seven page story called, Night Drop, an excellent wash job for $200. There was an Old Lady, was a weird little tale of six pages by the talented Sal Trapani from Warren's Creepy #16 that sold for $60, our lowest price yet. But for my money, I would just pay a little more, $65 for a six page Eerie #11 story called Witch Hunt, by Joe Orlando.