Archie Comics: Adventures of The Fly 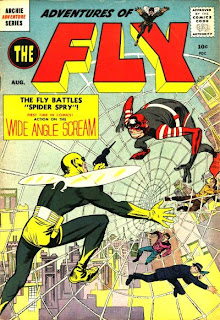 Hearing rumors that his employer, Mr. March, was a sorcerer, orphan boy Tommy Troy snuck into his attic one night to discover a weird glowing ring that the boy was compelled to try on. As the room was plunged into darkness, Turan, Emissary of the Fly people appeared out of another dimensional plane activated by the mysterious fly ring. Explaining how his people were overcome by power-hungry despots, they reduced his race to the insignificant life form known as the fly! Since evil and greed still flourish in the world today, the emissary stated that only one pure of heart could still wield the powers of the lost fly race by simply rubbing this magic ring. Thomas Troy, met the challenge, and became the super-guardian of justice known as, The Fly. Now possessed with the insect's properties, Troy has the strength of a hundred men, can see in all directions, scale any height, and fight crime with his ultra quick reflexes and feared buzz-gun whose powerful stinger leaves crooks unconscious. Grown to manhood, our hero serves justice by day as an attorney at law, but as night falls on a sleeping city, Troy becomes the nemesis to all criminals, the dreaded Fly! First published in August of 1959, this early Joe Simon and Jack Kirby hero lasted for thirty suspenseful issues before its cancellation in 1964. 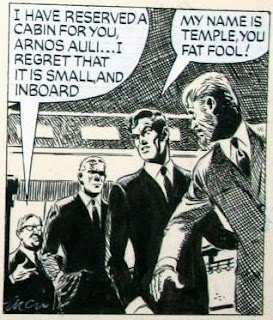 Francis Durbridge's crime novelist turned private detective, Paul Temple, started out in a collection of 1938 radio show serials before later featured in four films produced in the 1940s. Durbridge further success with a novel and Paul Temple television show helped spur the Associated Press editors to develop a strip version which began in the London Evening News on November 19, 1951 for its twenty year run. Since Durbridge was hired to write the feature, he quickly picked up his main characters, Paul, his beautiful wife Steve, and Scotland Yard's Sir Graham Forbes. Alfred Sindall was chosen as the first artist, but soon left to develop his own strip property, and Bill Bailey too over the drawing chores. But most fans just remember the skilled pen work of artist John McNamara who changed the look of the title character to match his on screen persona. Numerous marketing items and pocket-sized comic books soon followed, but who can forget the fond memories of this delightful strip reprinted in America's Menominee Falls Gazette. 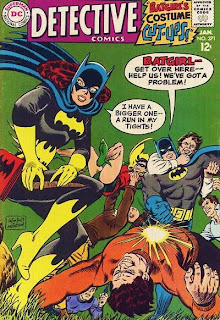 With her first appearance in Detective Comics #359 from January 1969 spawned from the ABC TV program, Batgirl has become one of DC's more popular female characters over the years. Barbra Gordon, was a mild mannered librarian who was on her way to attend her father's Policeman Masquerade Ball in a Batgirl "homage" costume she designed herself. On her way to the party, she witnessed the villain Killer Moth ambushing millionaire playboy Bruce Wayne as part of an massive extortion plot. Impulsively rushing to help her father's friend, Barbara enjoyed the excitement of the chase so much, she decided to devote her life to fighting crime. Wearing her utility belt similar to the Caped Crusader's, she has at her fingertips all the modern devices needed in her endless war against crime. With the beautiful heroine's extensive skills in the martial arts, and a custom-built batcycle, Batgirl often fought with Gotham's Dynamic Duo in their many memorable adventures together.

Posted by Dave Karlen at 5:04 PM No comments:

Make Mine Marvel: The Incredible Hulk 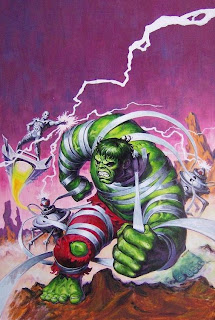 Doctor Bruce Banner was preparing a test of his new gamma-ray bomb created for the United States government, when he noticed a youth on the bomb site. In rushing to save the trespassing Rick Jones, Banner was bathed in rays of the explosion, changing him into a green skinned raging monster. Borrowing heavily from both Frankenstein and Dr. Jekyll and Mister Hyde this creation of writer Stan Lee and artist Jack Kirby debuted in 1962 as The Incredible Hulk. Misunderstood by the public as an evil monster, this green goliath's only friend was the boy he saved, Rick Jones, as Bruce tried to evade capture from his former boss, General "Thunderbolt" Ross. Betty Ross rounded out the cast as Banner's girlfriend in between his transformations to the creature as the doctor continually searched for a cure. After a short six issue run in the original series, Hulk was featured in Tales to Astonish before he took over that title with issue #102. Out of all the artists that worked on the popular Marvel Comics feature, Herb Trimpe is best remembered in depicting the emerald giant. 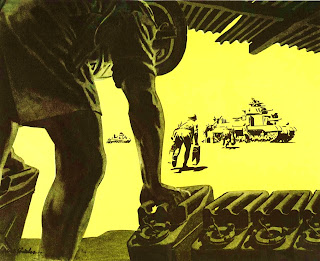