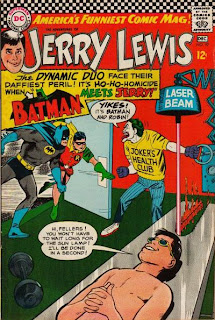 I never appreciated the humor artists as a kid, since the super-hero genre was really my bag, until I gave them a long second look as an adult. (If I'm now considered grown up?) Then I discovered the amusing artwork of Bob Oksner on The Adventures of Jerry Lewis. His zany off the wall stories were just wonderful, and I especially loved those Flash, Superman, and Batman cross-over issues, because I was crazy about the characters. They were a real blast, and started my interest in other DC humor titles like the earlier Adventures of Bob Hope, or TV related properties such as The Many Loves of Dobie Gillis, which I've seen a few pages of original art surface on eBay recently, but have not yet been lucky enough snag one for my collection. I did have the pleasure of viewing some rare original Shelly Mayor Sugar and Spike pages from a local friend who is also a cartoonist/collector. Until recently these beauties were impossible to find, since Mayer loved doing this comic based on his children. Sheldon kept most of his original artwork, but some pieces have shown up lately in auctions. The blue pencil details under the India ink were really fantastic to behold, giving the pages a cool look, and they had a lot more punch that I'd imagined from just seeing the printed
book.

National Periodical Publications had many fun titles like Fox and Crow, Laurel and Hardy, Stanley and his Monster, Swinging with Scooter, Angel and Ape, Welcome Back Kotter, and a score of others that were often a strange mix of a humor/teen type book in the Archie tradition. Though Archie Comics always had them beat on any of DC's attempts to enter the wacky teen market. I enjoy them all now because of the great art by Scarpelli, Estrada, Severin, Oksner, and others. But still, I was never a real fan of the "big foot" funny animal school that Harvey, Dell, and Charlton, seemed to produce the best product overall. But what I really loved were those spot cartoons by Henry Boltinoff for the Cap's Hobby Hints, that taught us all those neat tricks about model building. Since I was assembling all the Aurora monster and cave man kits at the time, any help on making them look better was information well received. I always enjoyed any of the fact pages that taught me something that were often shoecased in the DC titles. I once saw a bunch of these Cap's Hobby Hints originals and literally drooled all over them, since their simplicity was a marvel of design and clarity. But before I realized I really needed one, they were gone down the art highway to another quick thinking collector. Boltinoff also did some Casey the Cop gag panels and other features, before he moved on to his syndicated park ranger daily, Woody Forest, and his later extremely popular Word Jumble puzzle panels.

Remember those little Sergio Aragones drawings in DC's Plop! comic from the seventies. Another DC experiment that tried to compete with the one and only MAD magazine, which of course never really occurred. But the energy and humor of Aragones little figures running across the Plop! borders or in pages of MAD work just as well today, where they can still be seen in every issue. MAD has also been running some great reprint features on artists Bill Elder and Wally Wood, and the wild cartoons of Basil Woverton's really knocked me out. Though, in my humble opinion, Woverton's art was not as powerful in black and white when compared to those spectacular Plop! covers which are truly goofy comic gems. And what about Sergio Aragones long running Conan spoof from Marvel, Groo the Wanderer, that was also a favorite of mine, and those originals go for some sky high prices. Not Brand Echh, was another wonderful Marvel book from the sixties that poked fun at itself and other publisher with that zippy Marie Severin artwork and all the other solid figure artists from their talented bullpen in every issue, similar to the later What the...?, laugh comic of years later.

But I believe that my all time favorite humor art must be Harvey Kurtzman's Hey Look! strip feature, was first published in Patsy Walker #22, way back in May 1949. It was the first work that Kurtzman had complete control over and and totally defined his abilities in storytelling and style, using just those two simple characters, always really killed me.

Bwana, I would have to agree with you, Oksner was a rare talent indeed.