From his debut appearance in DC Comics' Showcase #17, archaeologist Adam Strange was used to being in difficult spots, but when fleeing from savages in a hostile South American jungle, he found himself struck by the transporting Zeta Beam sending him to the planet Rann. Little did they know that the first city of that alien world, Ranagar, initial attempt to communicate with humans unexpectedly brought them Earth's first interstellar spaceman! Strange quickly learned the language and customs from his beautiful girlfriend Alana, and her scientist-father Sardeth. Our hero soon becomes Rann's first citizen and savior protecting Rann from all types of alien invasions... often using some bizarre weapons like huge magnifying glasses to burn their futuristic cities, or weird space vacuums to suck up their inhabitants. From natural disasters to internal warfare, nothing was too complicated for Adam to solve with his quick analytical mind, flying rocket-pack, and handy ray gun. But despite Strange's love for Alana, he cannot remain on his adopted planet for long since the Zeta Beams effect soon wear off sending him back to Earth, where he must calculate when the next beam with strike, to be there for his next transport before it's gone. 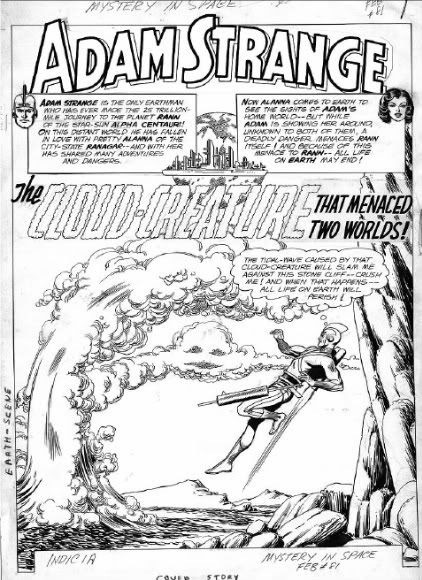