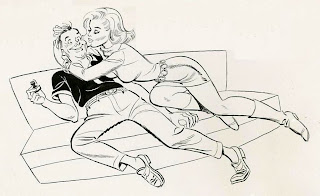 Well, I finally reached my 100th posting today, hope you have enjoyed my original art blog so far... here is the bio on one of the best strip men in the business... Bob Lubbers. Born Brooklyn, New York 1922. At seventeen I t played the trombone in a big band five nights a weeks and went to the Art Students League in the daytime. My pal Stan Drake and I left Bridgman's life class one day and marched down to Centaur and sold the comic mag features we'd created. Before long I was doing features at Fiction House until the war. Fiction House welcomed me back after my service and features and covers poured out until 1950, when my mentor Ray Van Buren led me to United Features Syndicate and "Tarzan" and National Cartoonist Society membership. Al Capp called one day and soon "Long Sam" was born. I did double duty when Sylvan Byck gave me "X9" to write and illustrate, later on "Robin Malone" ran out its contract at NEA. I took on heavy with "Abner" for Al until his death. Segued in fifteen years of animatics on Madison Avenue until retirement in 1989. Grace and I are going for our 60th wedding anniversary in 2003. Grandson Rich, his mom Wendy and her Mike, and son Bob and his Ruth are the joy of our life. God bless all who've been our friends and colleagues through this wonderful run.