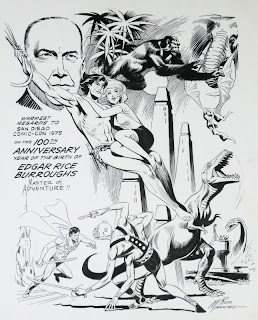 Best know for his work on Edgar Rice Burrough's Tarzan of the Apes, Russell Manning was born in Van Nuys, California in 1929 and after completing high school he enrolled in the Los Angeles Art Institute. When just starting out in comics, Russ was drafted in 1950 and sent to Japan where he excelled in his map making skills while drawing cartoons for the base newspaper. After discharge from the military, Manning was fortunate to meet with Jesse Marsh who was drawing Tarzan for Dell Comics at the time, and helped him get a position with the Dell art staff. Russ drew various Western and movie related titles including the Tarzan backup feature Brothers of the Spear. His later creation called, Magnus, Robot Fighter, was a Tarzan inspired hero set in the distant future which was an instant fan-favorite for Gold Key Comics.

Chosen to succeed his friend Jesse Marsh in 1965, Manning quickly made Tarzan an exciting feature all his own, and was hailed by his many fans worldwide for his loyal intrepretations of Burrough's work. This success persuaded ERB Inc. to have United Features Syndicate pick Russ to take over the syndicated Tarzan dailystrip in 1967. Adding a Sunday page the following year, the artist was praised for his inspired stories and artwork, though unfortunately the strip continued to be a commercial failure. In 1972, Russ left the daily to give more attention to the Sunday page, which was alway his favorite, and do other Tarzan related comics on the European market. In 1979 the artist was asked by the Los Angeles Times Syndicate to illustrate the new Star Wars strip which he did until his poor health made Russ turn over the feature to Alfredo Alcala, just months before Manning's early demise on December 1, 1981.