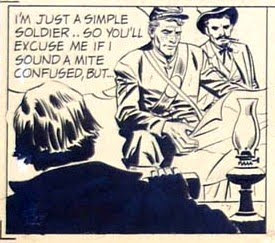 When the New York Herald-Tribune Syndicate wanted to explore both sides of the American Civil War in a new Sunday feature, the adventures of Johnny Reb and Billy Yank was born. An interesting attempt to try new themes in newspaper strips, it was first released on November 18, 1956, and published in a little over sixty papers at its height of popularity. It showcased with their symbolic names a Southerner from Virginia called Johnny Reb, and his New England partner for the series, Billy Yank. When starting out the soldiers exploits were told one North then South, switching back and forth evenhandedly taking turns with the stories. Later on there came a preference for the Southern character, so the strip title was shortened to Johnny Reb, now focusing more on the Confederate hero. Written by Ben Martin and drawn by the talented Frank Giacoia, the team did equally well on elaborate battle scenes, or quieter moments, often using many historical personalities from the period. One of the last full page Sunday strips, it was also ghosted at times by other famous artists like Jack Kirby and Joe Kubert. But after three years, and twenty complete tales, the public seemed to lose interest, preferring newer features hitting the market, so with less circulation and fewer papers the series suddenly ended in May of 1959.