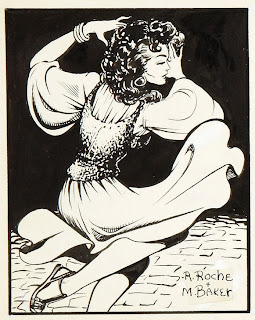 Surviving just over a year, Jerry Iger's independent Phoenix Features produced an beautiful new strip, Flamingo, in February of 1952. Initially drawn by one of the Golden Ages premiere "good girl" artist, Matt Baker, it quickly gained an strong following, highlighted by equally sensational scripts by Ruth Roche. Flamingo was a dark haired shapely Gypsy dancer whose various adventures took her all over Europe and she helped others with her many good deeds. With the help of her American boyfriend, Joe, and her loyal father, Old Pepo, Flamingo foiled kidnappers, caught burglars, and drove all the men wild with her exotic dancing and extreme beauty. A feature ahead of its time, it scripts dealt with issues like prejudice and intolerance, as well as being written by a woman and illustrated by one of the first African-American artists in comics. Unfortunately Baker left the feature half way into the run with John Thorton taking over the artistic chores, whose illustrations could never lived up to the high standards set by Baker. Even with adding a enjoyable Sunday page and continuing entertaining story lines, the feature finally closed in March of 1953 with Flamingo marring her one true love. 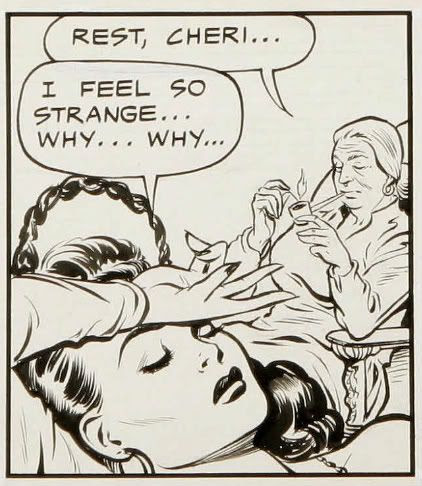 Hello Dave, RE your comment on Matt Baker, that John Thornton could never live up to Matt's standards of illustration of Flamingo. They both had a different yet similar styles with pen and ink. John T. loved creating Flamingo and worked very hard on those strips. His artistic style of Flamingo was toned down but it was clean work and humorous too. John was graduate of the NY Academy of Art, he went on to become the Art Director for years at Frederick;s of Hollywood (drew Flamingo-esc inspired models) and continued on commercially. Although he has passed, John Thornton still has many fans from around the world and It is generally thought in comments that he and Matt Baker both did a wonderful job creating those strips. Thank you for your time and consideration, You have a very interesting art blog. Respectfully, Julia Thornton, Hollywood, CA.

Thanks for replying Julia, I love Flamingo comic strips. Really interesting story about both Baker & Thornton work together at the end of Baker's run of the strip.