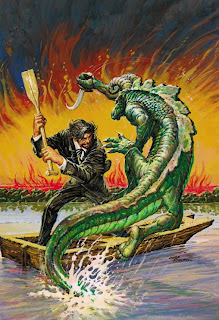 As a child growing up in the 1970s, I was fascinated by the colorful painted covers of Gold Key Comics. I later found out that some of their greatest short-lived titles were done by the nicest man in comics, the talented Jesse Santos. Born June 24, 1928, Santos was already an artist at the young age ten with a mural he did that was placed in front of his town church in Tereas, Rizal. At fifteen he he started his career doing portraits of both American servicemen and Japanese soldiers that occupied his small town. Even the Filipino guerrilla fighters sought Jesse out to draw talismans of good luck on their clothing. Working as a sidewalk portrait artist he was soon discovered by cartoonist Tony Valasquez who had the young Santos illustrate his first feature, Kidlat, for Philippines' early Halaklak Comics. When Pilipino Komiks started out Santos teamed up with Damy Velasquez to produce the most famous detective strips ever produced in the country, DI 13.

Later attending the University of Santo Tomas, he soon quit school to fulfill more art assignments for Paraluman magazine, Liwayway, Ace Publications, Gold Star Publishing, and numerous others. Handling magazine and book illustrations, covers, portraits, and movie advertisements, this hard working artist still had time to team up with some of the best talent to produce many new comic series over the years. His success in the art world helped him win awards and serve as as officer in both the prestigious Philippine Illustrators and Cartoonist and the National Press Club. Leaving for the United States in 1969, Western Publications quickly picked up the talented illustrator to draw various sword and sorcery and adventure titles like Davy Crockett, Dagar, Tragg and the Sky Gods, Brothers of the Spear, The Occult Files of Dr. Spektor, and Mystery Comics Digest, just to name a few.

Santos unique style had a loose and rough approach to his heroic characters with both some life-like portrait expressions and realistic but exaggerated and distorted figures, which were a wonderful combination that made him stand out in the comic world. The artist was a member of  many groups including the Philippine Comic Archives and the Philippine Science-Fantasy Society. His fine art paintings have been exhibited by the Society of Western Artists, winning numerous awards while shown in international art shows, universities, museums, galleries, and private collections. A man of many talents he is well remembered by fan and pro alike for his contributions to comic art.