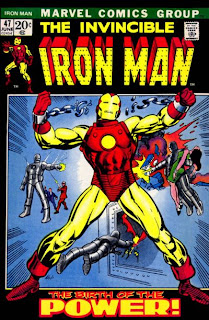 Tales of Suspense #39 from March of 1963 was the debut of one of Marvel Comics most inspiring new heroes, the "Golden Avenger" known as Iron Man was written by Stan Lee and initially drawn by Don Heck. Millionaire inventor Tony Stark while in Vietnam was kidnapped by the evil warlord Wong-Chu, who demanded the industrialist to build him the world's most powerful weapon. With an injured heart from his sudden capture, Stark fabricated an iron suit with built in pacemaker to keep him alive during this grueling ordeal until he eventually escaped by the sacrifice of another fellow scientist. Though Jack Kirby helped create the early look of the character in his bulky grey iron suit, Steve Ditko later greatly streamlined the flexible suit of armour, now forged in flashing gold-and-red. After fighting hordes of Vietnamese villains, Iron Man finally returns to America to work as Tony Stark's bodyguard, to be always close at hand when danger strikes. With a legion of various armour changes over the decades, Iron Man has become one of Marvel's hottest and long-lasting properties, especially with its blockbuster silver screen treatments with Robert Downey Jr. in the title role.