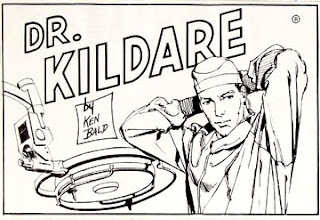 Max Brand was best know for his Western tales, but back in 1938 he was screen writing in Hollywood for a living and created two main characters for what he thought a minor film called Interns Can't Take Money. The overwhelming response to Doctors James Kildare and Leonard Gillespie spawned ten more entries in the film series. Later in 1961 Dr. Kildare debuted on NBC television with Richard Chamberlain in the title role which sudden success encouraged King Features to start a strip version on October 15, 1962 and added a Sunday page on April 19,1964. Written by Elliot Caplin and drawn by Ken Bald, the young, idealistic Kildare was an intern at Blair General Hospital whose new ways clashed with the older seasoned Dr. Gillespie. Whether it was gunshot wounds or cases of amnesia, Dr. Kildare hot-headed enthusiasm was always present as he treated the beautiful patients from the delicate pen of Bald. Though there were many of these soap-opera story lines that ended in romance with a patient or nurse, the handsome medic was definitely married to his career. The artist skillful representation of the main characters based on the actors likenesses from the hit show made it a very attractive feature that lasted nineteen years after the shows cancellation in 1965, with the strip ending in late 1984. 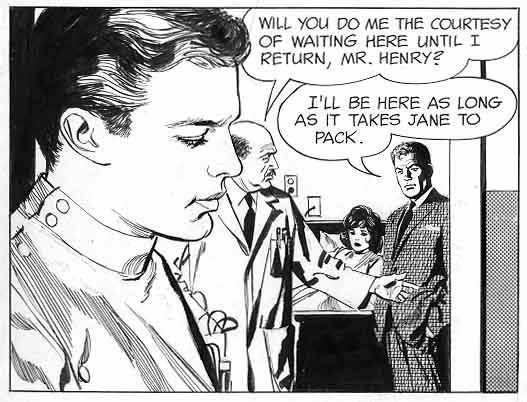