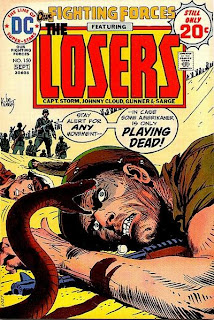 In November 1969 G.I.Combat #138 introduced another popular DC war title (before landing in Our Fighting Forces #123), a team of four heroes nicknamed "The Losers" due to some unfortunate losses they all suffered at the beginning of their military careers. Captain Storm first command was sunk by a Japanese submarine; brand new recruits were killed on a patrol guided by Gunner and Sarge; and Johnny Cloud lost a fellow pilot flying along side him in combat. After the team brilliantly helped Jeb Stewart and his Haunted Tank destroy a fortified Nazi radar tower, the Military High Command decided to create a new secret special task force, and "The Losers" were born. Sometimes joined by a lovely Norwegian woman named Ona, this special unit fought Axis tyranny throughout Asia and Europe, but never quite shaking there self-imposed feelings of being "Losers". Together with Gunner and Sarge's German Shepard K-9 sidekick, Pooch, this team of heroes fought for truth, justice, and the American way. Often graced with those fantastic Joe Kubert covers and a dynamic collection of Jack Kirby stories made this a favorite with DC's many "Big 5" collectors.