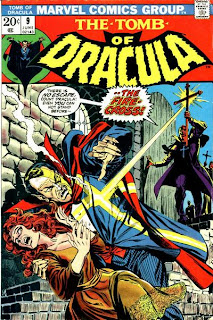 A few years ago I met and spoke with Marv at a party at a mutual friend's house. I told him one of the many story-telling techniques I appreciated during his run on The Tomb of Dracula was his devoting a page to sketching a "walk-on character", making us care about this person's problems and aspirations, but also pity and even fear for them, because we know the last panel will show them fall victim to Dracula's thirst. We know everything Marv had skillfully established to flesh out this character, will very suddenly simply stop!

Marv did such a great job building Dracula's character over the run I asked for some insights on how he approached writing the Count.

"Especially to himself," I suggested; and to my delight Marv's eyes lit up as he replied, "Exactly!"