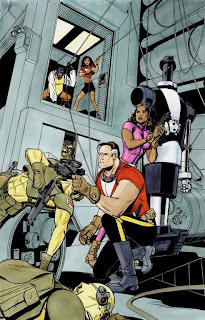 One of the most enjoyable heroes to come along in the last few years was by Alan Moore and Chris Sprouse with their retro superman, Tom Strong, which made his first appearance in 1999 with America's Best Comics. Moore's homage to adventure, fiction, and pulp characters, developed a Doc Savage inspired hero with a 1940s comic book feel. Strong is a large muscular man whose strength and intelligence lies in the rare Goloka root his scientist parents gave him in their experiments to make the ultimate human being. Over one hundred years old, with just a touch of grey at his temples and a simple costume, Tom grew up in an alternate world similar to earth, in the wild jungle land of Terra Obscura. Upon the death of his parents in a freak accident, his father's manservant, a dapper robot named Pneuman, helped raise Tom until he chose his mate, the lovely Dahlia. With the help of their daughter, Tesla, they set up the Stronghold in Millennium City to help fight for truth, justice, and the oppressed. Rounding out the cast is the snappily dress ape called King Solomon and a wonderful cast of evil villains including the scientist/magician Paul Saveen. To complement Moore's imaginative adventure stories was the handsome sleek line of Chris Sprouse which capitalized on his love for drawing gadgets, so the tales have lots of planes, spaceships, and other complex machinery. But with only thirty-two issues of his own title and six books from a spin-off series, Tom Strong vanished from the comic racks as many of the heroes before him only to return recently in some new mini-series! 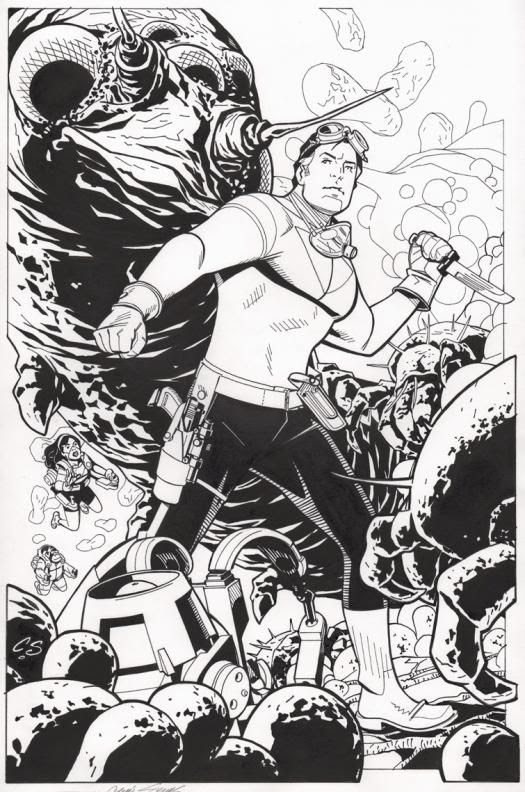