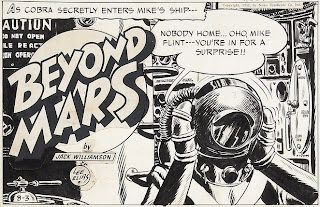 In 1952 the New York News wanted to celebrate there success from a steady increase in newspaper circulation and decided an exclusive feature created for their publication would be just the ticket. Soon after a full page action-packed Sunday entitled Beyond Mars debuted on February 17, written by science-fiction author Jack Williamson and illustrated by popular comic artist Lee Elias. Roughly based on Williamson's novel Sentee Ship, this antimatter powered vessel soared across the universe by counteracting the pull of gravity on other celestial bodies. Mike Flint was the star of the feature, with the help of rotating alien side-kicks, and though he was billed as a licensed spacial engineer, he turned out to be more of a policeman for the surrounding solar systems.

It is said Chester Gould suggested many of the story lines and helped Williamson from time to time on a proper way to present a comic-strip plot. This colorful space-opera drama with a stellar "Dick Tracy" feel, was beautifully rendered in the "Noel Sickles School" by Elias with its amazingly detailed exotic locals, amusing alien creatures, beautiful women, and lots of two-fisted action. But as with many strips over time, the New York News believed their creation did not live up to its expectations and cut the size to a half page in late 1954, which probably contributed to its untimely demise on March 13, 1955 as the creative team wrapped up some final loose ends in the last Sunday.

Jack Williamson said his heart was broken when the strip was canceled. He loved writing it. (Fortunately, he lived 51 more years.)

It got started when a New York Times review dismissed a novel, saying his writing "ranks only slightly above that of comic strip adventures."
Ana Barker of the Sunday News took this as a recommendation, and hired Williamson to work with Lee Elias.

For some related history, about his antimatter Seetee stories, see my article at http://www.symmetrymagazine.org/cms/?pid=1000643

AWESOME, I NEED TO SEE THIS AGAIN!

One of my earliest memories was this strip. At the time I was not fazed by the way the stories didn't wrap up, but just - stopped.

I was disappointed when it,too, just - stopped in late 1955. Nobody has ever tried to continue it or add depth to the characters.