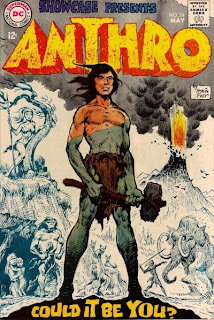 DC Comics in the 1960s always had some interesting new ideas for characters they would often promote in their signature anthology book, Showcase, and issue  #74 was no exception, introducing the prehistoric cave boy called Anthro. Caught between two different and conflicting worlds, Anthro was the first Cro-Magnon boy with intellegence who had some very unusual parents. His Neanderthal father was a fierce warrior  and leader of his people's Bear Tribe, while his deceased mother was from a mysterious lost race that gave him the wisdom and intellect not yet seen by his race. Equipped with only his quick wit and problem solving skills, our stone age hero was superior to his peers in every area, as he excelled in hunting and even showing compassion to his enemies. An unbelievable quality never seen before in this savage time. Not accepted by the brute force of the old ways, Anthro was the new hope for an age of reason in the dawn of civilization. Artist Howie Post was the perfect choice to illustrate the cave boy with his rough and rugged style for its debut issue and his short-lived six issue self-titled series that soon followed.