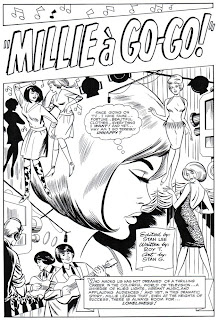 Born in New York City in 1932. I started my career in 1949 as a staff artist for Timely Comics (which is now Marvel). I was also in charge of the color department. In 1958 I went freelance and continued to color all of Marvel Comics for about ten years. As "Stan G" I was responsible for all the color costumes for all the classic Marvel superheroes and villains of the 1960s. During the period from 1949 to the late 1960s I illustrated adventure stories, drew gag cartoons, pop art for advertising, and illustrated all the teen titles for Marvel, Kathy, all the Millie the Model titles, Patsy Walker, etc. From '68 to '70 I drew the teen titles from DC Comics...Scooter, Binky, and Debbie's Dates. Since 1968 I've been drawing many of the titles and covers for Archie Comics, and for five years I drew the Archie Sunday strip. Some of my other illustrations have appeared in childrens books, greeting cards and magazines: McCalls, Redbook, Seventeen, etc. I was given the Ink Pot Award at the San Diego Comics convention in 1994 when I drew the most improbable paring of Archie Meets The Punisher, a Marvel-Archie crossover book.

Thanks for posting that. Stan G. needs more kudos for what he brought to Marvel. Also his illos are fantastic.