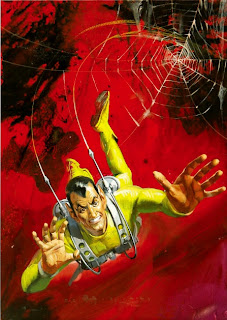 An artist whose striking covers always increased sales, he worked in many genres including war, western, horror, romance, mystery, and especially erotic titles. Born in Rome in 1935, Alessandro Biffignandi  attended the Favalli Studios learning his craft before moving with his family to Milan in 1958. From the late fifties to the early sixties the artist worked with various Milanese art agency's producing pieces for the French market. He painted covers for numerous mini comics  published by LUG including Nevada, Hondo, Kiwi, Yuma and Rodeo. The illustrator also drew the interiors for features like Rombo Bill, Flambo, Antonin, Agent Special K3, Sergeant Fury and Peter Berg. The late sixties found Alessandro working for the British company Fleetway where he was painting  covers for The Spider and Johnny Nero, where he based the image on Italian actor Marcello Mastroianni for the Super Library series. The Super Library was a reprint of the original series that started in the Lion comic series, as Biffignandi also drew at least one cover for Thriller Picture Library. Always feeling more comfortable painting in oils, Alessandro made a career move in the early eighties, leaving comics to concentrate more on magazine and book illustration. His colorful and dramatic covers have graced books published in England, the United States and Italy. From the late nineties Biffignandi moved into drawing calendars for, amongst others, Italy's fiscal police force, the Italian Guardia di Finanza. Today he lives with his family in Rome.
﻿