My Greatest Adventure: The Shadow 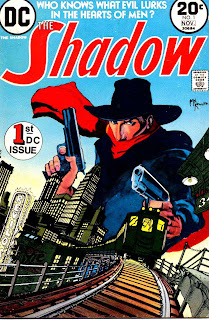 "Who knows what evil lurks in the hearts of men?" The Shadow knows! From the characters humble beginnings in radio in the early 1930s, it followed the exploits of the fictional vigilante who fights crime using his many skills and psychic powers posing as a "wealthy, young man about town", Lamont Cranston. Becoming one of the most famous characters of the twentieth century, The Shadow was marketed on his own radio program, pulp magazines, comic books and strips, television, serials, video games, and motion pictures. So when DC Comics got the rights to portrays the classic hero in the early 1970s, it did an "atmospheric interpretation" of the character using writer Dennis O'Neil and artist Michael Kaluta for the first issue. In its twelve issue run from this first DC series, from November 1973 to September 1975, Kaluta illustrated five moody issues in his unique detailed style, before Frank Robbins and Filipino great E.R. Cruz finished out the series. True to both the pulp magazine and radio drama character, The Shadow and his many agents fought the seedy underbelly of crime on DC pages which began an fan favorite, but could still not stop its cancellation. But before the series ended National payed homage to the Master of Darkness as he teamed up with Batman on two occasions as the Caped Crusader called the ageing crime fighter his "greatest inspiration". The Shadow even once saved young Bruce Wayne's life before his later dark transformation into the dreaded Batman.

Just The Best
Read these DC issues with WANT
I had to find these on a spinner rack
Fell in Love with THE SHADOW
or...Mwk Kaluta
Then
Frank Robbins Cruz F-in It Up
Yet Still THE SHADOW
Now As Time Goes On...
Every DC Issue Is Magic
Kubert Covers All Artists
-Sam