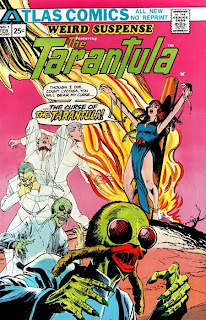 Weird Suspense was one of the better books Atlas Comics produced in their short run. Written by Michael Fleisher and drawn perfectly by the moody work of Pat Boyette it starred a spider-man monster called the Tarantula. The story begins in Europe during the Middle Ages where hideous huge spider monsters led by their Spider-Priestess terrorize the countryside transforming the innocent villagers into these vile creatures. Count Lycosa follows the giant arachnids back to their lair  to find their princess. He quickly returns to the village, rallies the townsfolk, slaughters the tarantulas and burns their beautiful leader at the stake. Unfortunately, before she dies she places a curse upon all the male descendants of the Lycosa family, the curse of the Tarantula! As the tale shifts to the modern day, Count Eugene Lycosa, the 11th in line to bear the heinous curse, has vowed to use his tarantula powers for good to protect the helpless and prey on evil. So over the next three stories, our European nobleman transforms to the humanoid-tarantula creature to confront some escaped prison killers who think they can prey on the Count and his butler in there mansion estate, a gang of city hoodlums, and  even a tricky swami. But the Tarantula's greatest foe was the Spider-Priestess being reborn from ancient rites preformed by her Spider-Cult, as she is revived by an hypnotized thug only to eat him as his grim reward. This evil woman kills the Count's manservant, luring him to her secret arachnid infested mountain cavern to trap our weird hero. But at the last moment the tables are turned by a stroke of luck as the Tarantula battles the Spider-Priestess on a cliff edge where she falls to her death below. Featured here is the unpublished cover to the fourth issue that never saw the light of day by artist Pablo Marcos! 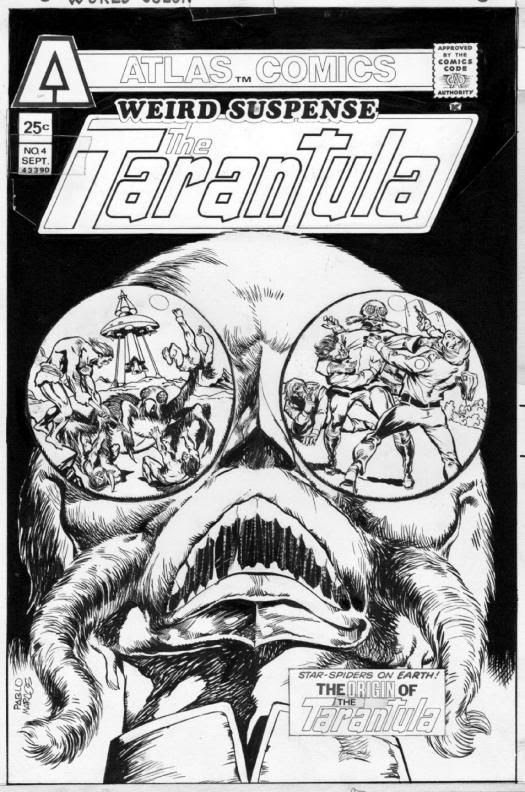