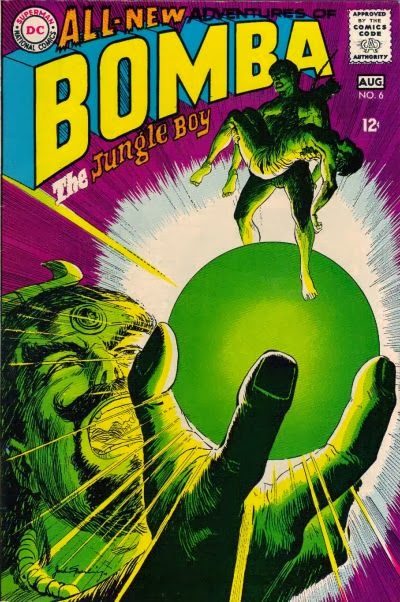 Being a sucker for jungle themes, I first saw Bomba as back-up reprints in DC's Tarzan comics. With just seven issues to its name and lasting just one year, National Comics Bomba The Jungle Boy tried to capitalize on the syndicated TV series "Zim Bomba" which had edited down footage from the Monogram movies starring Johnny Sheffield. First published in 1926 by "Roy Rockwood" a Stratemyer Syndicate pseudonym for various authors, Bomba was one of the first Tarzan inspired imitators that lasted till 1938, with reprints and other spin-offs from the feature. Having twenty books in the series, Monogram was trying to cash in on the seventeen year old "Boy" actor Scheffield from the Tarzan pictures. Without the budget or production values of the earlier Ape Man productions, it still became one of there most popular movie series for the youth audience. But getting back to the DC comic, it was written by George Kashdan and illustrated by Leo Sommers as "The Jungle Boy" burst on the scene with his wild and woolly adventures before Jack Sparling took over the artistic chores to finish out the short run adventure comic.