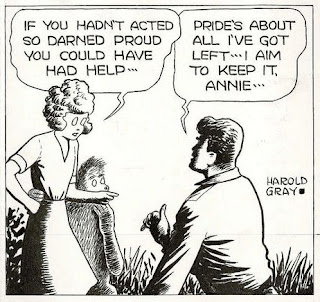 The National Cartoonist Society was formed in the mid forties and over the years the became the largest and best know society of professional cartoonist in the world. With over five hundred members worldwide, the Society's home offices are in Winter Park, Florida, with an additional sixteen chartered regional chapters throughout the United States and one in Canada. Continuing in my series of favorite NCS members that are no longer with us today, is the talented artist Harold Gray and his sensational strip, Little Orphan Annie. How could a feature started in 1924 still be published eight decades later and inspire her own radio program, several motion pictures, and a hit Broadway show? The phenomenal success of the feature must be how Gray make us care about his charming characters with his wonderful stories he told that entertained one generation of readers to the next. Here is his short biography that he provided to their archives.

Born: away, way back podner, in Kankakee, Illinois on 20 January 1894 -- graduated Purdue University, 1917 -- rose in army to shavetail, bayonet instructor. Chicago Tribune art department -- then assistant to Sidney Smith on "Gumps" five years. Started "Annie" in New York News and Chicago Tribune, 1924. " Now appearing in numerous papers." As they tell it in "who's who" -- Home: Green Farms Connecticut -- West Coast base: La Jolla California. Doing business under firm name of Gray & Gray -- Drive average of 35,000 miles per year, trying to keep even with ninety million readers exposed to our lovable (?) little monster -- hope to carry on till Annie is elected president -- why not? Her "Daddy" is rich; and Annie wouldn't be the first "old lady" who ever made it!

Thanks for this, Dave. This is my first time to your terrific blog. So much to like here! I'm bookmarking it now!

Mike, thank you for your comments. I am looking forward to that publication as well.