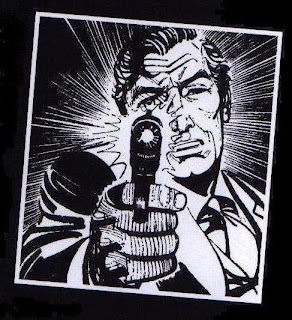 In 1957, five years before United Artists' Dr. No hit the screens, the London Daily Express approached writer Ian Fleming with offers to publish a serial strip based on his world famous secret agent, James Bond. Fleming was initially reluctant to accept the very generous offer due to concerns over the quality of the writing, not wanting to see his new creation cheapen in value while he was still planning more novels. Even though he had worked as a journalist for the Express, he desired to keep his secret agent, as secret as possible for the time being. Fleming wrote at the time: "The Express are desperately anxious to turn James Bond into a strip cartoon. I have grave doubts about the desirability of this... Unless the standard of these books is maintained they will lose their point and I think there I am in grave danger that inflation will spoil not only the readership but also become something of a death-watch beetle inside the author. A tendency to write still further down might result. The author would see this happening, and disgust with the operation might creep in."

With the assurances of Express editor, Edward Pickering, that it would be the "Rolls Royce" of strips, and that Fleming would have final approval over all the material, the author finally agreed to sell the rights. The first novel, Casino Royle, was published in July 1958, adapted by Express staff writer Anthony Hearne and illustrated by John McLusky. During the planning of the feature, Fleming commissioned his own artist's impression of James Bond as a guide to how he saw his hero. Having seen the portrait, McLusky found it too "outdated" and "prewar" and created Bond with a more aggressive masculine look. He based the character on a number of film actors such as Robert Taylor, Gary Cooper, and others with a fine chiseled look. There is a difference of opinion as to who helped create the face of Bond. It's been said that McLusky's drawing of Bond may well have been responsible for Sean Connery being cast as 007. Even though Dr. No was filmed years after the first strip appeared, there still was an uncanny resemblance to the Scottish actor. One rumor is that after a performance, Connery was sitting in his dressing room with a fellow actor who was reading the Express and remarked that Sean should one day play Bond since he looked remarkably like the character. Others believe Connery's agent saw the dailies and encouraged him to tryout for the role, and made Sean up for the audition "to look like the drawings McLusky created." Another view is that McLusky just changed his concept of Bond to fit the likeness of Connery once the films became so popular.
.

Whatever the case, the public must have liked the face of Bond because of the immediate success and increased sales of the London Daily Express. McLusky's clean style coupled with the loyal adaptations of the novels helped fuel the early beginnings of Bond-mania. Fleming's worries over the simplification of the narrative turned out not to be the problem he thought it might be. The stories were told as clearly and simply as possible, trying to avoid any confusion for the reader since they often lasted close to a year in length, which was customary of a newspaper daily format. Even without Ian Fleming's detailed-filled prose, the tales still managed to be extremely entertaining and held up surprisingly well, in their strip incarnations.

John McLusky began his art career illustrating for the British Royal Air Force during and after the second World War. He also worked on other various projects like Laurel and Hardy, The Keystone Kops, The Pink Panther and numerous Thames children's television programs. His artistic style emphasized simplicity and readability, and even though the Bond characters could appear rather stiff at times, they were always clearly identifiable. This was something of a necessity, since one always needed to identify the characters, even though they may not have been seen for several months. Like most strip cartoonists, McLusky had a collection of reference material to help him produce that meticulous attention to detail required in a daily feature. Every day his two young sons would help critique the Bond panels up until being submitted to the publisher. Once when McLusky needed a quick reference for a Luger pistol, one boy loaned his toy Luger gun. The next day in the finished drawing Bond was holding a weapon with a little popup hatch for a roll of paper caps. Fortunately, his two loyal proofreaders, not to embarrass 007, suggested a return to the drawing board to whiteout this minute mistake.

For the next six years, McLusky and Gammidge worked their way, fairly chronologically, through Fleming's Bond novels and short stories, and in doing so, helped lay the visual groundwork for the upcoming films. Only taking a break in 1962, when episodes of Thunderball were stopped due to Fleming publishing The Living Daylights in the rival Sunday Times. This angered Lord Beaverbrook, owner of the Express, who immediately dropped Thunderball in the middle of its storyline. Fleming also had his own legal problems with co-writer Kevin McClory, who contributed ideas to Thunderball. After a lengthy settlement and reinstatement with the Express in 1964, the daily feature started up again, with the adaptation of On Her Majesty's Secret Service.

After completing thirteen Bond thrillers, our "Licensed to Kill" agent got a fresh start with a new creative team on the the last Fleming novel. Writer Jim Lawrence's stylish scripts burned up the page as artist Yaroslav Horak dramatic illustrative style brought a new hardness to the feature. Horak's crisp line and beautifully textured black and white designs were always equally matched by Lawrence's rich and imaginative prose. James Bond now became more ruthless, and more complex than his readers had ever seen before. This fresh approach in gritty realism made the villains more savage, women more beautiful, and Bond a lot tougher. The new look for 007 also lost his striking resemblance to the Scottish actor and further dissociated him from the famous film persona.

Yaroslav "Larry" Horak began his career in portrait painting, but soon switched to illustration for the larger Australian magazine publishers. His successful comic series The Mask, ran afoul with Victoria's State censors, but was soon followed by his daily outback adventure strip Mike Steel for Sydney's, The Woman's Day. A quick talent for animation and storyboards also kept Horak busy on many different projects. When given the Bond strip in 1965, Horak's adaptation of The Man with the Golden Gun was highly praised in the direction he approached the series. The syndicate was so pleased with their new creative team that Lawrence was given permission by the Fleming Trust to produce new original stories for Horak to draw. Overall they worked on thirty-three thrilling Bond tales for the Daily Express and other various syndicates in Europe..

A total of fifty one Bond stories were produced. As well as the above mentioned creators there was one story, Doomcrack, illustrated by artist Harry North. When the Bond series finally ended in 1983, it had spanned four decades, with a total output of more than 6500 individual strips. A number of the original Horak and McLusky stories have been reprinted by Titan Books and there is a separate McLusky's version of The Illustrated James Bond, 007. There was also a series of Scandinavian James Bond comic books reprinting some Horak dailies and also providing some new original stories. Unfortunately, these are the only appearances of the Bond strips since they originally ran in the London Daily Express, Sunday Express, and Daily Star. These adventures are almost completely unavailable and largely unknown for the millions of Bond fans. Hopefully, these spy stories with there lasting and intriguing appeal will one day be fully appreciated by Fleming's fans worldwide.