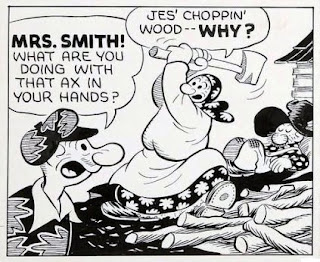 Thank you for your wonderful tribute to Fred Lasswell. He is truly one of our greatest most genuine, imaginative, humorists, inventors, cartoonists, educators and humanitarians--He was humble to the core --and he never missed a cue to make us laugh or see things from a simpler, more enlightened perspective. I grew up with Fred Lasswell. Every surface in our home was always full of creative inventions and projects (His, Hers and Ours). Every detail of life and nature inspired his imagination. He loved his work and especially every one of his fans, who he worked for seven days a week, 365 days a year. --He was also the best father and creative mentor anyone could ever have. Thank You ---Pati Slesinger Lasswell