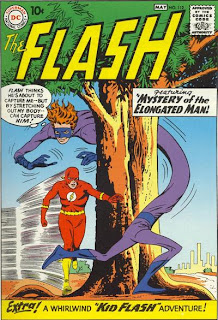 As a child, Ralph Dibny, was fascinated with the human body's powers of flexibility and sought out the "India Rubber Men" and other contortionists that traveled in the circus sideshows. Continuing his search for an answer into adulthood, this amateur detective discovered in his travels around the world that all these acrobats had one thing in common: before a performance each "Rubber Man" consumed a drink called Gingold which contained the juice of the Yucatan gingo fruit. After much study and experimentation, Ralph Dibny managed to isolate the unknown chemical in the fruit, and now when he drinks a concentrated dose his body acquires elastic properties far beyond belief. With his new incredible powers, our hero became the super-stretchable sleuth known as the Elongated Man being able to contort to any position. Now after a few costume changes over the years, he is still solving mysteries and fighting crime with the help of his beautiful wife, Sue. The Elongated Man made his first appearance was in DC's The Flash #112 in May of 1960.