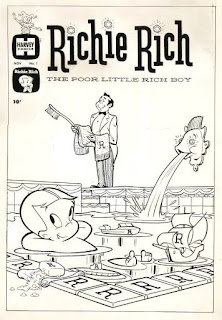 Born Bronx, New York City, in 1921, graduated from "Music and Art" and "School of Industrial Arts". Spent ten years working for publishing houses doing layouts and lettering, "drybrush" illustration for pulp magazines and "wash" for one aviation magazine. We hired a crackerjack letterer, my future wife, Grace. I was art editor for Harvey Publications, where I created three characters, "Hot Stuff", "Stubmo the Giant" and "Richie Rich", whom I named after son, Richard (Mary Anne, Peter and Suzanne are my other children). Harvey acquired "Casper the Friendly Ghost" - I drew it for thirty two years plus created its present look. Drew and inked all the covers of our comic books - worked on the first Casper television show (opening and closing storyboards). Finished up my career at Marvel Comics. I covered a lot of ground in fifty years -- now I'm an old man thinking about it all, and how good God has been to me...amen!