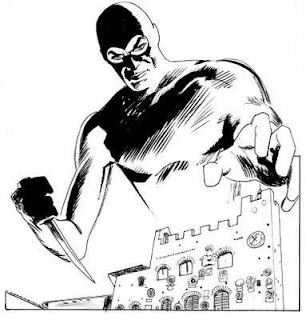 In 1962, two sisters in Milan, Angel and Luciana Guissani, created the ultimate super criminal known for his violence and skills, the dreaded Diabolik! A master of disguise, this anti-hero, is as brave as he is clever, equipped with gadgets and tricks, that make Diabolik always one step ahead of enemies, whether it be the police squads or mafia hit men. A man who lives by his own rules, theft or murder are just another day at the office for this phantom criminal with the mind of a master chess player. His beloved girlfriend and assistant, Eva Kant, is the only good thing in his endless life of crime as he is relentlessly pursued by an equally skilled policeman named Ginko. Spawning a new age in dark adult themed comics in the early sixties, the feature was written and drawn by a stable of artists, still under the guiding hands of its two creators. Denounced by the Church, politicians, and Italian censors alike, this amoral anti-hero still lives on today and inspired a cult hit film of 1968, Danger:Diabolik, starring John Phillip Law in the title role.