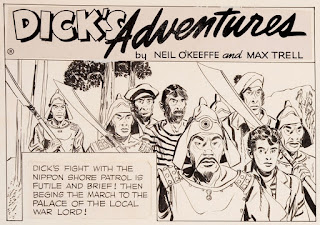 Newspaper pioneer W.R. Hearst wanted to "incorporate American history in the adventure strips of the comic section" so he persuaded his friends at King Features to create Dick's Adventures in Dreamland. Our hero was a young boy about twelve named Dick who was the lead-in to each historical happening as shown in the first adventure where Dick is advising Christopher Columbus on how to obtain financing for his voyage of discovery. Max Trell was chosen to script the historical adventures as the artistic chores fell into the very capable hands of Neil O'Keeffe. Produced only as a Sunday feature without word balloons but descriptive panel's like Prince Valiant, the strip debuted on January 12, 1947. Having the luxury of a full page format, O'Keeffe had room to lay out well rendered compositions setting the time, place, and social conditions in great detail. Dick dreamed his way into riding with Paul Revere through Lexington and Concord, crossing the Delaware with George Washington, and assisting Andrew Jackson in the Battle of New Orleans, just to name a few episodes. Upon the death of Hearst in 1951, Dick's Adventures quickly went from full, to half, to a smaller third-page size, starting a decline in readers as the featured eventually folded in October of 1956.