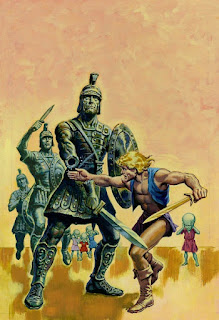 Created by writer Otto Binder and artist Frank Thorne in July of 1964, Mighty Samson, was a wandering barbarian adventurer who lived in a devastated area around New York after a future nuclear war. A mutant giant himself, Samson used his strength and street smarts for the good of mankind, keeping a promise to his dying mother. He now fights radiation-spawned mutant beasts and men as he loses an eye in his debut issue by killing a lion/bear creature and using his hide as a cape. Nursed back to help by the beautiful Sharmaine, and her scientist father, Mindor, the trio set off on many unusual adventures around "N'Yark" in its thirty two issue run. Graced with some beautiful painted covers by Morris Gollub, Luis Dominguez, and George Wilson, Thorne's rugged interior pencils and inks were equally a perfect match for the post apocalyptic series. Unfortunately, Frank Thorne left after issue #8 as the series continued under Binder and new artists, Jack Sparling, Jose Delbo, and Jack Abel. An original  series created by Western Printing, who owned the Gold Key line, Mighty Samson lasted until 1969, with a few issues years later in the mid-1970s and finally a last appearance in 1982, though it was licenced for a short time to the Mexican publisher Editorial Novaro under the title Mighty Sanson.