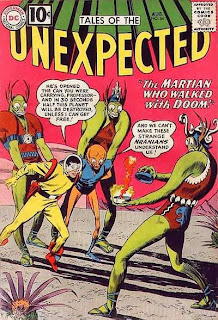 First appearing in DC's Showcase #15, Rick Starr is a New York business executive of Allied Solar Enterprises, but also secretly a guardian of Earth's solar system when disguised as the adventurer called Space Ranger. From his secret base within an asteroid orbiting between Mars and Jupiter, our hero has a well equipped laboratory and full arsenal of weapons including his trusty anti-gravity gun, dissolverizer, explosi-discs, and thermoblaze pistol to fight crime. With the help of his girlfriend, Myra Mason, who happens to be his secretary back on Earth, and the small shape-changing alien Cryll who Space Ranger rescued from a wrecked spacecraft, the trio protect the planets in his incredible ship, The Solar King. Space ranger has stopped many invasions, menaces, and would-be conquers in his 22nd Century adventures, and even defeated his ultimate enemy, the Gordanians, with the assistance of an ally from the past, the Green Lantern named Hal Jordan.