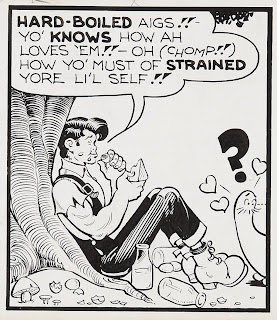 One of the most popular comic strips ever to grace the funny pages was Al Capp's historic feature, Li'l Abner, which ran for forty three years and inspired lots of merchandise, a television show, stage plays and motion pictures. Here is the short bio, in Capp's same satirical style...Al Capp Born in New Haven Connecticut in 1909 -- which makes me over forty. Attended primary schools in Philadelphia and Boston. First big-time job, at nineteen, with Associated Press doing "Col. Gilfeather". Fired. Job given to Milton Caniff, or Goniff - since it disappeared. Created "Li'l Abner", in 1934, for United Features and sued them for fourteen million dollars in 1948. Collected fourteen million denunciatory editorials from "Editor and Publisher". Was appointed Chairman, Cartoonists' Committee, of People to People Campaign by President Eisenhower in 1956. Didn't vote for him in 1952 or 1965.