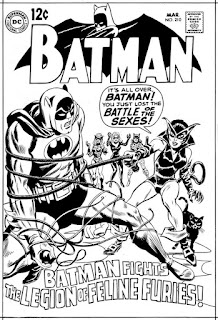 Starting out at Harry Chester's studio in 1940, Irving Novick first professional work was with Archie Comics drawing The Shield and continuing with the company until he later enlisted in the Army. After the war in 1946, Novick freelanced for DC Comics where he illustrated romance and war titles with his friend and writer Robert Kanigher, as well as working on his syndicated comic strip Cynthia from 1949-1956. Leaving comics for the Johnstone-Cushing advertising agency to become an art director, DC once again came calling, asked Irv to return and providing him with a generous contact, unheard of at that time. The artist got all kinds of perks including a pension, better page rate, the right to work from his home, and the option to continue other freelance work in advertising. Working on the Hasbro G.I. Joe campaign, the artist also drew Silent Knight for National's, Brave and the Bold anthology book and issues of the war title, Captain Storm. When Carmine Infantino took over as editor of DC in 1968, Novick was chosen to work with Julius Schwartz on the Detective Comics and Batman books. After drawing the character at its height of the TV show's Bat-Mania, Novick wanted to get back to Batman's roots with a darker tone and appearance. Lengthening his cowl ears a bit and spotting more blacks on the figures was the result on the first of Batman's continuity changes as in issue #217 for 1969, "One Bullet Too Many". Throughout the 1970s along with Neal Adams and Jim Aparo, Novick illustrated some of the most memorable Caped Crusader stories bringing back some old villains, and introducing new ones for the fans. Never one to miss a deadline, this consummate professional also did a number of Robin back up stories before being picked to draw The Flash as full time penciler from 1970-1979. Novick continued with DC on other series and projects until he retired from comics in 1986, gaining the undying respect of his fellow artists and editors as a true professional.