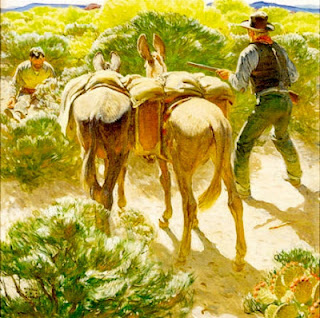 An orphan at the age of five, Harold Von Schmidt was raised by this grandfather in California, a "Forty Niner" whose stories of the old West fascinated the youth. As a young man, Von Schmidt worked as a cowhand and lumberjack, subjects that can later be seen in his rustic paintings after his studies at the San Francisco Art Institute and the California College of Arts. He became an art director at Foster & Kleiser doing mainly illustrations for Sunset Magazine. The artist did posters in WWI for the U.S. Navy and became an art-correspondent for the U.S. Air Force and King Features Syndicate during World War II. Studying with artist Harvey Dunn in the mid-twenties, he learned to paint the epic, not the incident, which lead to years of illustrations appearing in virtually all the major magazines filled with drama and action. Some of his best Gold Rush paintings are in the California Governor's office in Sacramento, as five of his classic Civil War scenes grace the walls of our West Point Military Academy. An officer in the American Indian Defense, Von Schmidt also won the the first gold medal awarded in 1968 by the National Cowboy Hall of Fame. Truly an artist's artist, Harold served as President of the Society of Illustrators from 1938 to 1941 and was a founding faculty member of the Famous Artists Schools based out of his home town in Westport, Connecticut.
﻿