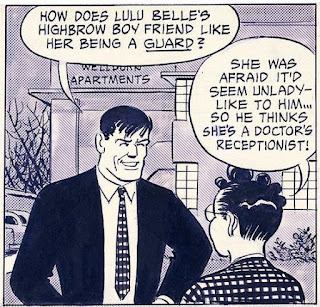 Born in time to see the last week of the nineteenth century...in Texas. Trained two months in World War I, then the enemy quit. Studied four years at Southern Methodist University and edited the 1922 yearbook. Spent summers touring the United States on the "blinds" of passenger trains, and six weeks at the Chicago Academy of Fine Arts. While free lancing in Dallas I sold a few gag cartoons to"Judge", married Betherl Burson, and headed for New York City. Did magazine illustration ,including Saturday Evening Post, Red Book, Ladies Home Journal, till 1929...then to Colorado for three years, drawing with one hand and rearing a heard of ungrateful sheep  with the other. Pet hates...sheep, bigots, male singers, and their screeching fans, revivalists. In 1937 I pinch hit for Roy Crane on Wash Tubbs while he frolicked in Europe. Stayed on as assistant till he left for greener pastures, then took over Captain Easy. Wrote and drew strip, and later the Sunday. Have three married daughters. Home in Orlando, Florida...ambition - to hold on till Social Security.