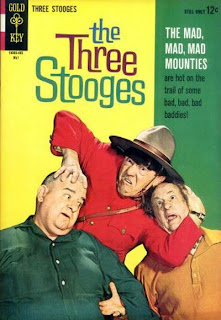 In early 1949, Moe Howard encouraged his daughter's husband, Norman Maurer, to create a new Three Stooges comic with friend Joe Kubert for the  St. John publishing company. These early  issues continued off and on till 1954 with some fantastic artwork featured Shemp as the third stooge since Curly had already left the act. Five years later with a new rise in popularity from the Stooges now on syndicated TV kiddie programs around the country encouraged Dell to bring back the beloved characters as part of their "Four Color" series, one "Comc Album" appearance,  and their "Movie  Classics" to promote their current motion pictures. Lovable Curly Joe now graced the numerous photo covers with our wacky trio often in wild slapstick situations. From these guest appearances in Dell/Gold Key's other titles the company decided to give the boys their own book in 1962  that lasted ten years and forty six issues with art by the talented  Pete Alvarado, as shown below. About the same time, K.K. Publications joined forces with Gold Key to produce nine "March of Comics" issues that were sixteen page digest sized comics provided free usually with children's shoe stores as a form of advertisement, and a few later "Top Comics" reprints of the Gold Key series. From the success of the The Three Stooges comics, Gold Key once again ventured into one last series called The Little Stooges illustrated again by Norman Maurer which was  billed as "The Wild, Wacky Sons of the Three Stooges". With only moderate success the comic ended after seven books in the two years published, which also unfortunately ended the Three Stooges zany career with Gold Key.